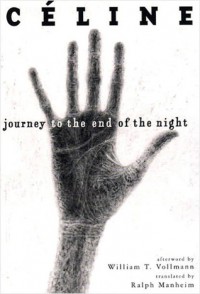 Originally, I thought about writing an eloquent review of this book, but intentions do not always come to bear fruit. The longer I think about it, the less apt I am to do it, so, instead of procrastinating, I'm just going to 'wing it' live.

I first borrowed this book from a library, but did not finish it in time. Well, I went to a store and bought my own copy. This alone should be enough to tell you that I liked it.

Reading this book took me way longer than it should have, but that is an entirely different matter. Life gets in a way, sometimes.

The Journey to the End of the Night is a very unique book. It deals with multiple themes, as seen through the eyes of the narrator who very well might be Celine himself. It sparkles with brilliant logic, it bores with pragmatic rhetoric, it shines like a torch of enlightenment, and it dumbs down history and geography for the sake of a mischievous joke. Above all, however, it is a wonderful, amazing work of literature.

The Journey to the End of the Night is largely a journey into the pitiful bourgeois existence of the middle class men and women we see every day. It is at night that our inner demons come out, hidden under the cover of darkness where Celine observes, a cigarette in one hand, and his penis in the other. Or perhaps not.

It is a journey into the darkness of the human soul. It traverses the first World War, French Colonialism in Africa, immigrants' struggles in America, and the petite bourgeois existence. Thrown into the mix are lust, murder, fleas, suffering, brothels, slavery, camaraderie, rebellion, hope, faith, drinks, and a lot of denial for the sake of escapism.

Above all, it is a story of humanity, not just one man alone. If one considers a plot of any kind, the novel finishes quite unresolved. However, if one considers the narrator as the story, it comes full circle, in a lazy sort of way. The events are circumstantial at best, but there is a raw reality to them. The protagonists are faulty, and the antagonists are very much like the protagonists, often blurring the line between them. After all, is there a clearly defined evil and good in the world, or do the lines blur more frequently than not?

Undeniably, Celine was an author who knew what he was doing. His writing style matches the story perfectly, and he is never too high up on his soapbox to not poke a bit of fun at himself.

I'm glad I ended up purchasing a copy of this book, as I plan to reread it sooner than later.