Down to Earth paranormal 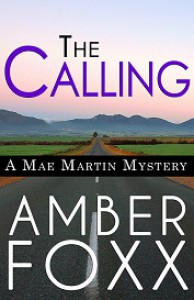 The Calling by Amber Foxx is not my usual reading material, however, my mind was long overdue for a 'lighter' read. The last time I read something in the paranormal genre was . . . hmm . . . ages ago. Nonetheless, intrigued by the positive reviews, I gave it a try. And I'm glad I did.

Right off the start, we are introduced to Mae. The neat little backstory is well developed later on, and any questions left unanswered in the beginning are answered. Mae has a gift she inherited from her grandmother, an Appalachian healer - she is a seer. And kudos to the author for making the distinction between a seer and a psychic (which is also explored and correctly evaluated later in the novel), a mistake too often made by others. Yet, Mae is stifled by her religious mother and promises not to use her gift.

Fast forward to present day, and Mae is all grown up, has some emotional baggage, and uses the gift again. But it is no longer the same Mae. This Mae has some real-world problems and some real-world dilemmas. Living where she lives, being surrounded by the people she is surrounded by, Mae is rightfully apprehensive to use her gift. Nonetheless, Mae cannot escape her calling, and her world slowly begins to spiral out of control.

I shall pause here to address something written by an another reviewer who mentions that The Calling is a "paranormal literary novel."

I disagree. While this is not your typical paranormal tale full of utter nonsense, it is still a work of genre. Unlike literary fiction, The Calling is very much a plot-driven work, and while the author did a great job with character development, it falls short of what I would consider literary narrative. I would say, however, that the narrative in this book is better than most genre works. And that's why it appealed to me.

So, without giving any of the plot away, I will dive into the negatives/positives.

The character development is rather good, both for our primary protagonist - Mae, and for all antagonists and side players.
The setting and scenery is well described, with neither too much details nor any perceived gaps. Having visited that part of the country, I found it believable.
The paranormal aspect of the story - Mae's gift and her family history is also believable and not far-fetched. The author must have done a good amount of research into the paranormal aspects featured in this book, and portrayed them accurately. Whether it was the gift itself, or the Native American healers and their traditions, or the Eastern approaches described later on, none of it came across as unbelievable. Again, kudos for that.
The introduction of real-world problems into the paranormal story was a refreshing and welcomed addition. Mae comes across as a real person, and not as a bimbo who one day wakes up to save the world from an impending doom. Good job.

Mystery - where is the mystery? If it was supposed to be her father, than it should have been more explored. If it was meant to be professor Tann, then I would need some closure.
Closure - I needed more of a closure, but that's a matter of opinion. I wished there was a closure with Bernadette, especially. And Charlie's involvement had a great potential for a buildup, but it never came. Instead. it ended with the promise of a better future. Being the first book in a series, I can only assume that some of this will come back later.
I would have liked to see more internal struggle in Mae. I mean, after what happened and the big shift in her personal life, I would have liked to see her vulnerability explored, her inner turmoil, et cetera. But, that would have made it a literary novel, and would have rendered the plot irrelevant.

Overall, The Calling was an enjoyable read, and definitely a well-written one. While not my usual genre to read, I embraced the characters and even cared for them. The story itself is quite plausible, and the writing held my attention.

I have received The Calling by Amber Foxx directly from the author, as part of the screening process for the now defunct The Source. The author did not request this review, did not offer me any compensation, and had no influence on my writing this review.